These photographs are from a concert troupe called The Headlights.


On the left (seated) is Private Henry (Harry) Storey.  At the outbreak of war he was living with his family in the road where he was born, Felton Street in Byker.  He must have been seventeen or barely eighteen when he joined the Royal Army Medical Corps (Territorials) in Newcastle.  According to family tradition he was a bugler – each Field Ambulance had a bugler. By the end of the War he was in the Army Service Corps.

This photograph is signed "Meilleur souvenir, H. Vienne" and "Sincerely yours, Harry Storey".


This must be the band that played for the Headlights troupe.  On the reverse is written "Sincerely yours" followed by two signatures:

Harry Storey's family had a great love of theatre. His father, John Henry Brett Storey, worked on the railways but his heart was given to drama and music and in his evenings he worked backstage.  Harry himself, after several years of great enjoyment as an amateur actor during the War, was very close to taking to the stage as a professional after 1919 – his sister Nancy was to be a Gaiety Girl.  Marriage in 1921 and a growing family must have played a part in his decision to take less risky employment. He set up his own successful building company in Newcastle and, after growing bored with retirement, was involved in the printing business of Hindsons, which was later bought up by Jordisons.

If anyone recognises any of the other men in the photo – or knows anything about Henriette Vienne – do please let me know!

(Harry Storey was my grandfather, btw)

Posted by Alice Barrigan at 14:25 No comments:

Email ThisBlogThis!Share to TwitterShare to FacebookShare to Pinterest
Labels: Newcastle upon Tyne, WWI

A Christmas card was sent in 1914 by the Heaton Road Baptist Church in Newcastle upon Tyne to the young men of the congregation who had joined the armed forces.  This particular card was sent to 18 year old Private Harry Storey of the R.A.M.C.  He lived with his family at 40 Felton Street, Byker. 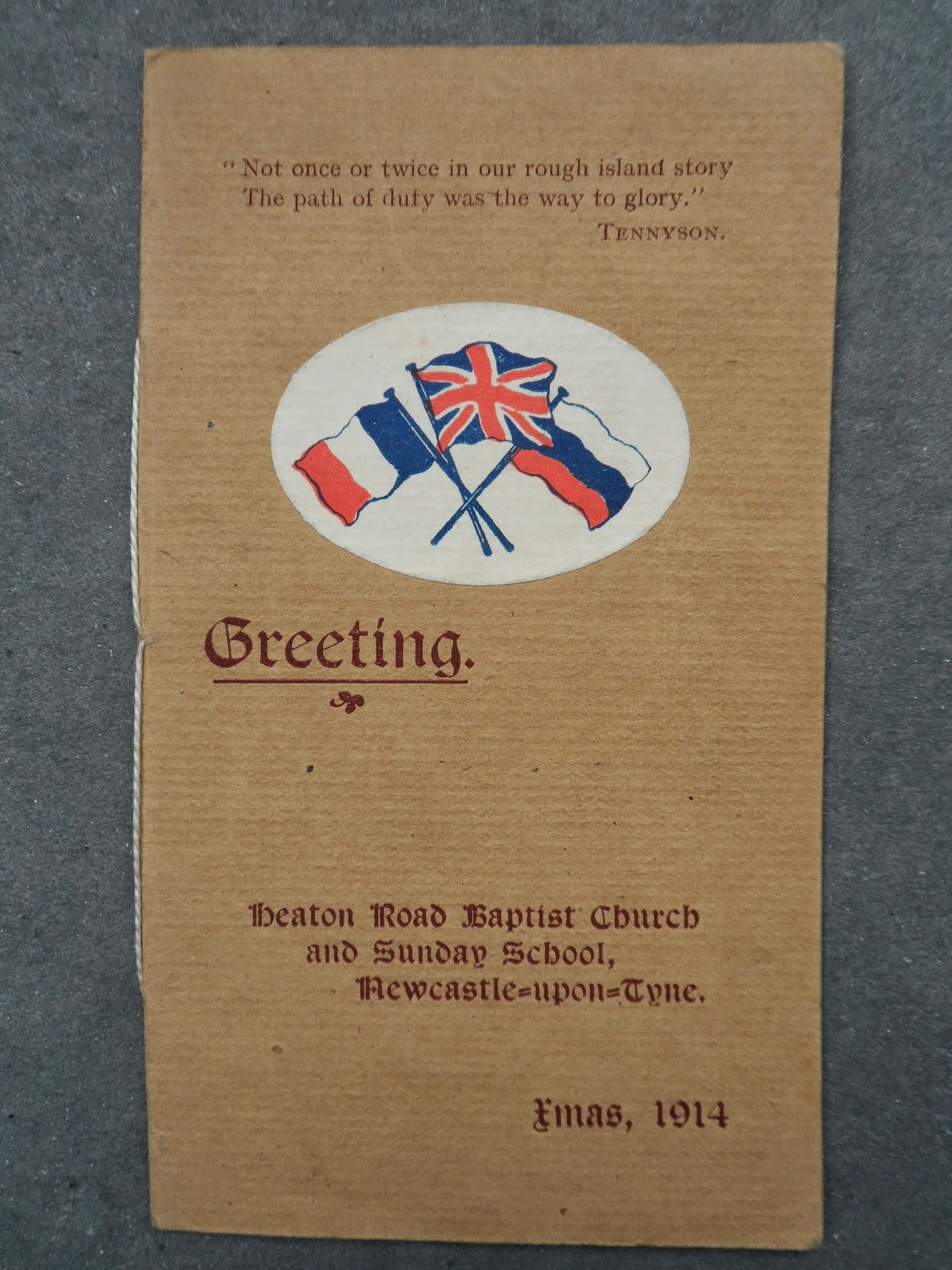 The minister wrote that

I am desired by your many friends in the Church and Sunday School to convey to you our united wishes for your welfare, our earnest prayer for your safety in the hour of peril, and our strong hope that amidst the temptations and difficulties that beset your path, you will remain true to the ideals taught you by loving hearts, in the days that are past. 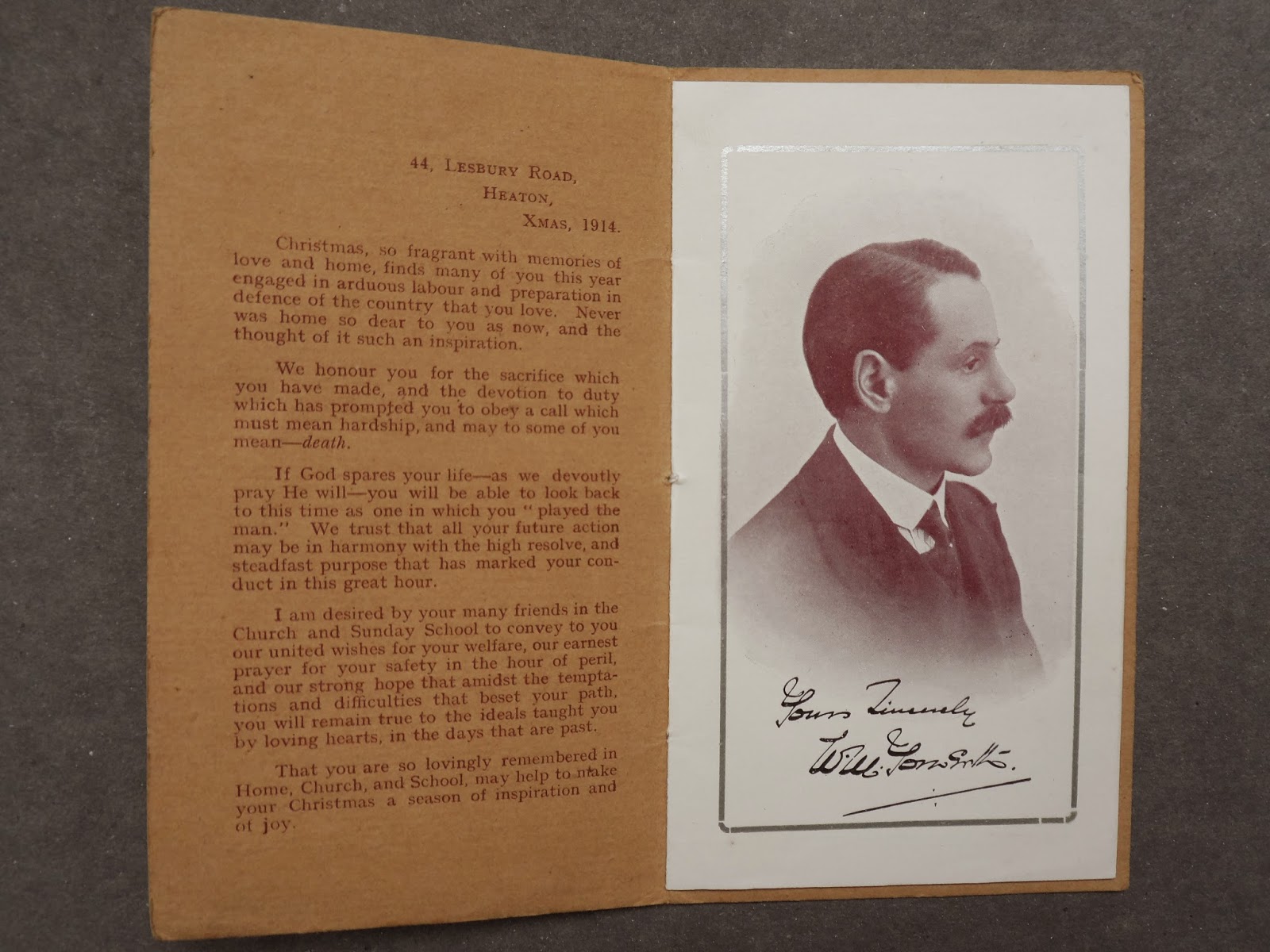 The recipients are listed in the Roll of Honour: 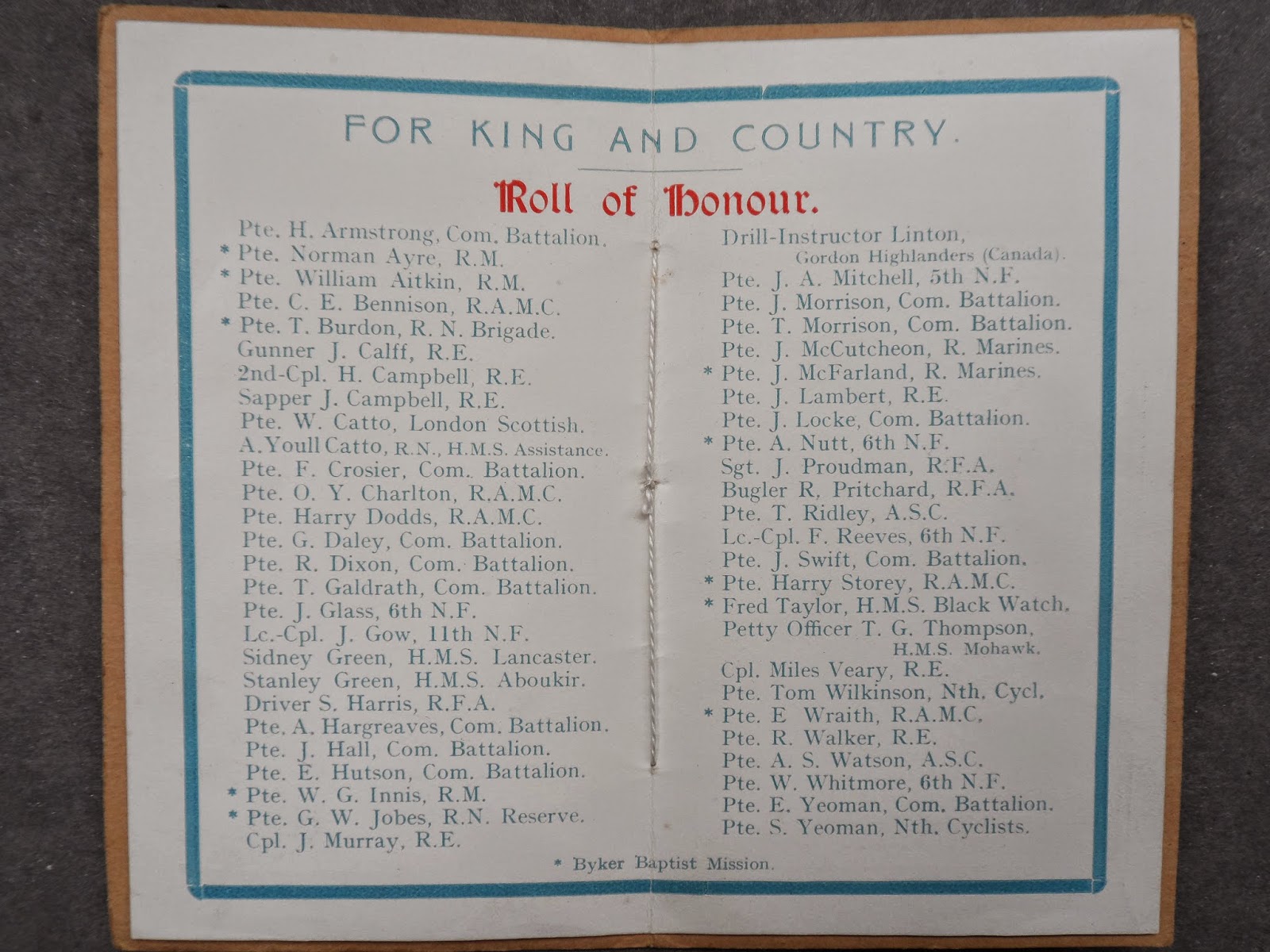 but one of them already would not be coming home.  William Stanley Green had died in the sinking of HMS Aboukir. 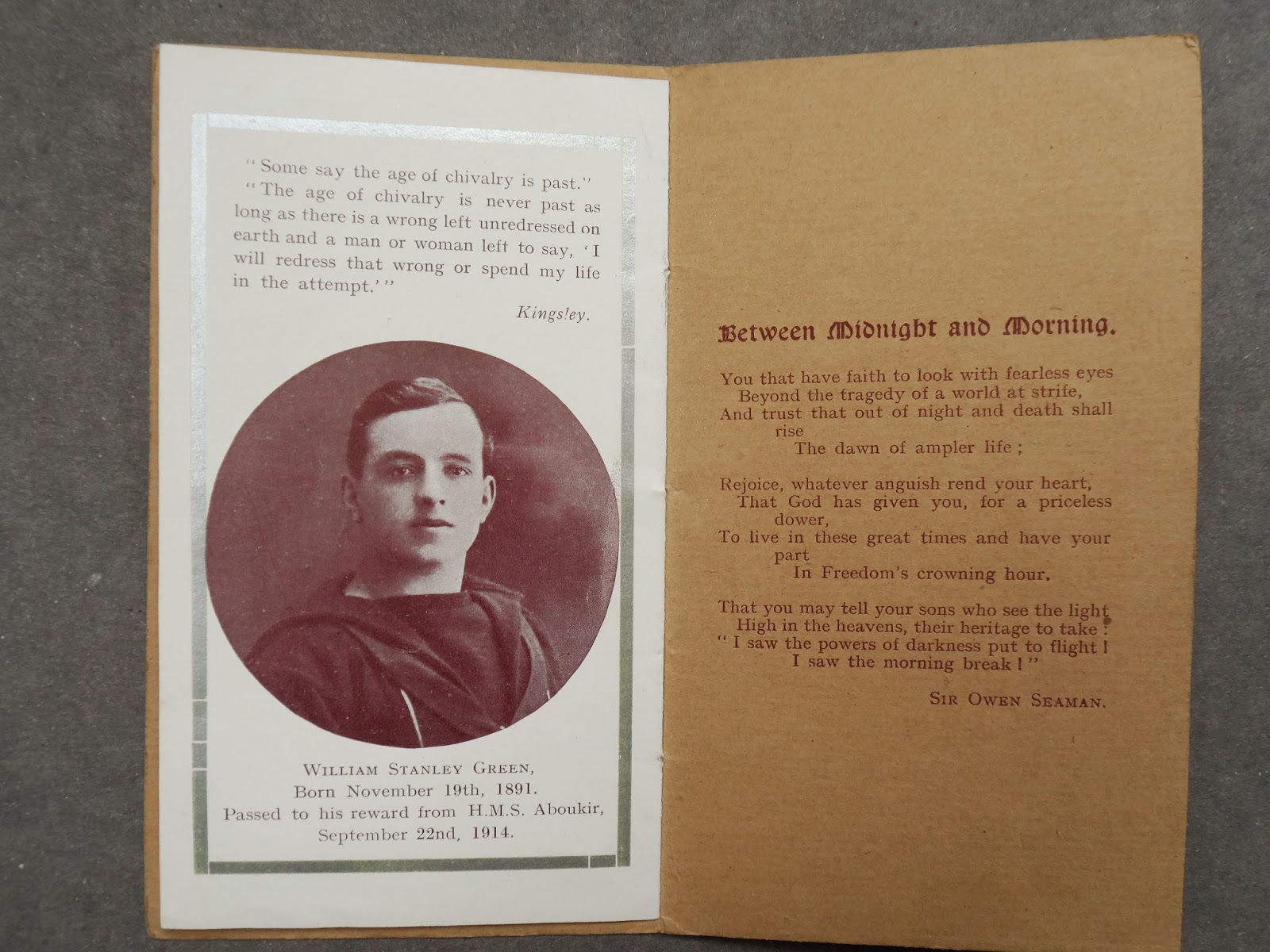 The names listed in the Roll of Honour are:

Posted by Alice Barrigan at 11:54 No comments:

Email ThisBlogThis!Share to TwitterShare to FacebookShare to Pinterest
Labels: Newcastle upon Tyne, WWI

A further detail to the story of Kitty Martineau

I have just found a note – as I continue to go through the last of my papers – to add to the story of Katherine Dawson Martineau, as told in the story of Helen Savile Clarke and her daughters.  (The series of posts on Henry Savile Clarke, his wife Helen Weatherill and their daughters begin here)

Kitty, a beauty with "violet eyes," died a few days after the birth of her son Esmond, on 7 December 1901.  She was looking quite well and was receiving visitors, when she called, "Nurse! nurse!" and died.

The story comes from her second cousin Madge Buchannan and may be true. 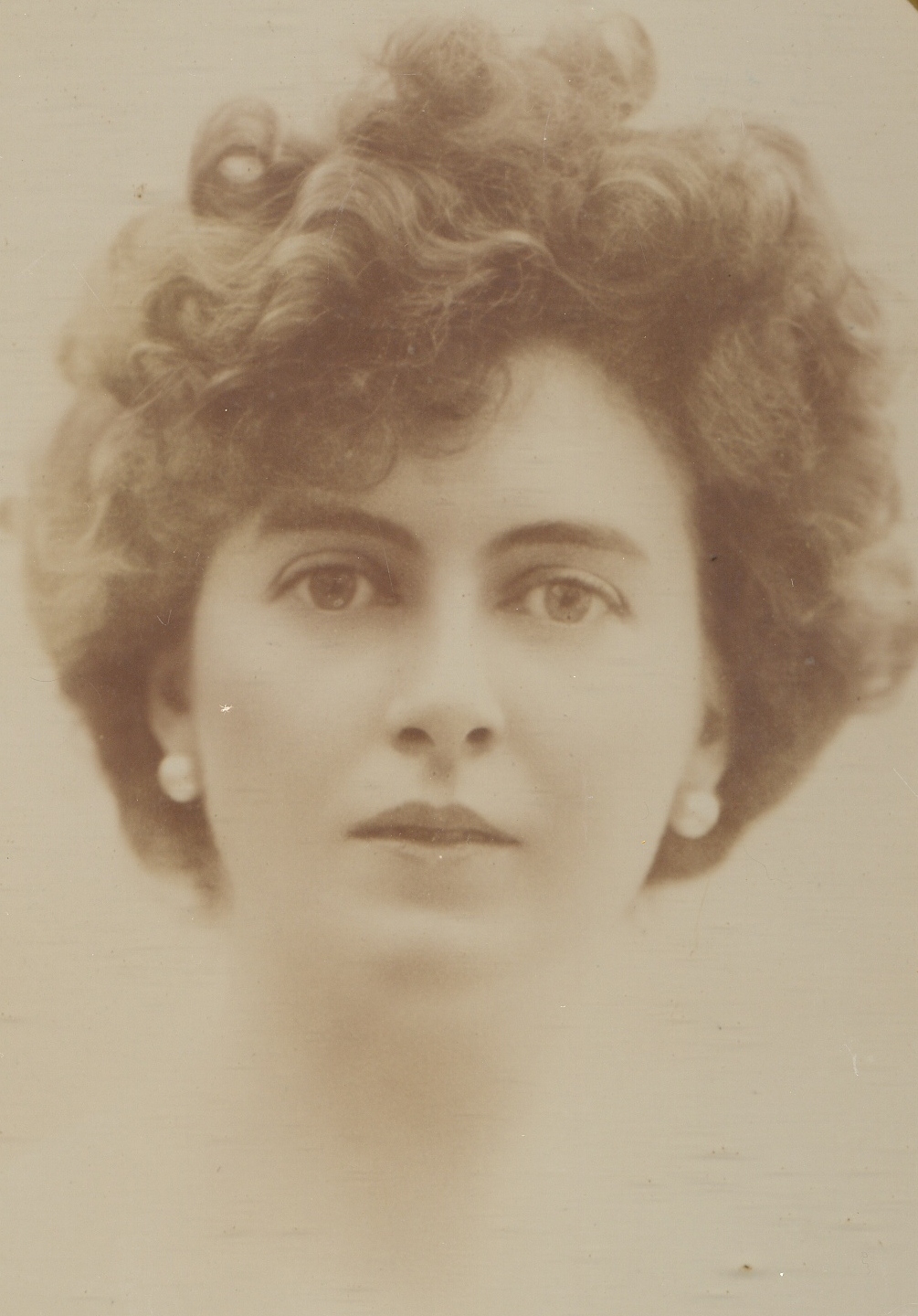 Her death certificate gives the cause of death as:

I didn't include this detail in the original piece, partly as I felt unqualified to comment on it, and partly because I couldn't quite bring myself to do so at the time.

On looking into it further, I think all I can comment is:

As far as I understand, "uraemia" is a term which was first used in 1840 to describe a patient in renal failure.  In this case it may be more an observation of symptoms than a diagnosis.  I notice that the Revised US Standard Certificate of Death instructions to be found in Mortality Statistics, vol 9 by the US Board of Census (1909), states

“Never report mere symptoms or terminal conditions such as […] “Uraemia” […] when a definite disease can be ascertained as the cause.  Always qualify all diseases resulting from childbirth or miscarriage."

I think all that can be ascertained (in the absence of someone experienced in historical medical terminology) is that she died four days after child birth and that her kidneys had probably failed.

And to think of that beautiful woman, who had lost her parents and her sisters so suddenly and in such a short space of time, suffering from alcoholism through her pregnancy – that's just too sad to comment on.

Posted by Alice Barrigan at 12:25 No comments: