I've written about Linden Grange before, as I explain in this blogpost.  It is the house that lies between Hutton Rudby and Potto, and was previously called Linden Grove.  In the early 19th century it was called Suggitt Grove, and before that, Tunstall Ground. 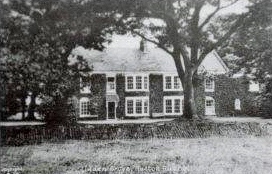 In 1822 it was inherited by Dr George Merryweather of Whitby from his uncle Benjamin Suggitt.  He was the inventor of the Tempest Prognosticator, a leech-powered weather forecasting device, and between the years 1840 and 1861 was curator of the Whitby Museum (and if you haven't visited the museum, then you simply must!)

An advertisement of 1830 gives us a glimpse of the interior of the house; you can find the history of the gardens, which were "stocked with the choicest Trees and Shrubs", here on the website of the Yorkshire Gardens Trust.

TO BE LET,
An agreeable COUNTRY RESIDENCE recently fitted up, and in complete repair, beautifully situated in Cleveland.

The Breakfast, Dining, and two Bed-rooms, will be Let Furnished, if required.

The Gardens and Pleasure Grounds are stocked with the choicest Trees and Shrubs.

This place is, in every respect, suited for a genteel Family, desirous of living in a rich and fertile country.  It is situated a quarter of a Mile from Hutton Rudby, 5 Miles from the Tontine Inn, 5 Miles from Stokesley, 10 Miles from Stockton, and 16 Miles from Darlington.

The Premises are open for Inspection; for Particulars, apply to Mr. MERRYWEATHER, Whitby.

The house became the home of the new vicar, the Revd R J Barlow (see this chapter of Remarkable, but Still True), until he built the vicarage on Belborough Lane.  It was clear from the letters he wrote to the newspapers during the Year of the Cholera that he was living there in October 1832, but when I was writing the book I could not find out when he moved in.  The following advertisement shows that he had not been long in the house when the cholera epidemic broke out:

A CAPITAL CORN-MILL, (from Michaelmas next) in excellent order, driving three pairs of Stones, with all requisite Machinery, and suitable convenience for an extensive business; together with a DWELLING HOUSE, and about EIGHT ACRES of superior Grass Land adjoining.

The above Mill is situate on the river Leven, at Rudby, in Cleveland, at a reasonable distance from the port of Stockon-on-Tees, and in a good Corn District.

Also, a compact HOUSE, and about SIX ACRES of Grass Land adjoining, in the village of Hutton, near Rudby, now in the occupation of the Rev. Mr Barlow, and suitable for the residence of a small genteel family.

For particulars inquire of GEO. BRIGHAM, of Rudby, near Stokesley Land Agent, if by Letter, post paid.
July 25th, 1832


I don't know where the compact house with its 6 acres of grass land was, but I think it was probably the house now called White House Farm, mentioned in the blogpost about the Revd Jeremiah Grice.

The information on the Rudby Mill is another useful addition to our knowledge of the mill.  A previous tenant, Robert Robinson, had become insolvent in 1823 (cf this blogpost on Various Occupants of Rudby Mill), so let's hope the tenant in 1832 was able to make an "extensive business" there, as suggested by Mr Brigham in the advertisement.

Visit the new Facebook page of the Hutton Rudby and District Local History Society and you'll find it a source of the most fascinating old photographs.

This is thanks to the hard work of Malcolm McPhie and he tells me there are plenty more to follow - just keep visiting the page!

Posted by Alice Barrigan at 20:59 No comments:

The marriage announcement for Anne Hutton and George Wilson, founder of the Hutton Rudby Sailcloth Mill, shows that her father's name was George, and that the family lived in Pilgrim Street, Newcastle.