Local newspapers report the news of the Armistice in 1918


A DAY OF REJOICING

The rejoicings which began in Middlesbrough yesterday morning over the news of the armistice continued without interruption till nearly midnight and the town has seldom passed through fourteen hours of such joy.  In the afternoon the streets were a seething mass of humanity, and Linthorpe-road has seldom been so congested.  All the works were stopped by mid-day, and as the day wore on the neighbouring communities poured their thousands into the town to swell the huge crowds who had already congregated in the main thoroughfares.  Owing to restrictions of all kinds which could not be entirely removed with a wave of the hand, the illuminated display was not on such a scale of grandeur as might have been possible on an occasion of rejoicing in the halcyon days of peace; but the people did their best with the lights at their disposal, and the brighter streets were a pleasant reminder of a time which seemed almost to go down into the distant past.  The sky was lit up at intervals by the pyrotechnic display, and the jubilant note which prevailed throughout seemed to be well controlled.  In the days to come when Middlesbrough spreads its wings it will probably be better able to accommodate such huge crowds on a day of national rejoicing, but it may never again have an occasion when the circumstances so thoroughly justified such an explosion of pent-up exuberant patriotic feelings.

STOCKTON'S REJOICING
In the long history of Stockton there have been many enthusiastic gatherings in the High-street opposite the Town Hall, but never one so large and so lively - and yet well behaved - as assembled yesterday afternoon when the Mayor and a number of other public men delivered short speeches of congratulation upon the great event of the day.  The band of the Bowesfield Ironworks played, and the people, with all their hearts, and with all the powers their lungs could give, sang the National Anthem, and then sent up cheer after cheer for the King.  "It is a memorable occasion, an occasion which has never before occurred in the history of the country," said the Mayor (Alderman J Harrison) "and we rejoice in it.  After four years of terrible war we have broken the terrible German menace, and we are confident that we have broken it in such a way that Germany will never again be able to make war.  This is not yet a declaration of peace, but we thank God that the armistice has been signed, and that we can see the end of the war."

PAST AND FUTURE
There followed loud cheers, and with cheers were also greeted the other speeches in the High-street, Stockton.  Alderman Bainbridge said we had fought a good fight, and won, and he hoped that everyone would feel the responsibility of doing his or her share in the work of reconstruction which lay before the country.  "Whilst," said Alderman Nattress, "we rejoice in victory, and whilst we think of those men who have won the final victory, let us not fail to remember those who have fallen on our behalf."  "It is a victory for the forces of democracy and freedom over autocracy and militarism," said Councillor Bollands.  Councillor W Reed said in the great fight we had proved that might is not right, but that right is right, and that the God of Righteousness had been on our side.  Councillor I Robson and the Vicar of Stockton also addressed the gathering, and the company broke up with the singing of the National Anthem.  Similar proceedings took place from the balcony of the Town Hall, Thornaby.

A solemn Te Deum will be sung at All Saints' Parish Church, Middlesbrough, tonight at 3pm, in thanksgiving for the end of the war.

THANKSGIVING SERVICE
During the afternoon yesterday, the No 1 South Bank Boys' Brigade paraded South Bank, calling the people to a United Thanksgiving service at the Wesleyan Church.  There a good and representative company, which was presided over by the Rev M P Evans, President of the Free Church Council, and addressed by the Revs H W Pates, J Rutherford, C Allwright, and Councillor Vaux.  National hymns were sung, and the thanksgiving of the assembly voiced by Councillor T Bosher, Mr T Peacock, and others.  It is intended to continue the rejoicing on Sunday evening next in the Baptist Tabernacle.


The Yorkshire Post carried reports of rejoicing across the region, including

Cheering soldiers were in great evidence at Richmond, and at the Market Cross there was a great crowd, where, on the motion of the Mayor, it was decided to send a message of congratulation to Marshal Foch, Sir Douglas Haig, and the Prime Minister.  At Catterick Camp a general holiday was proclaimed

At Whitby the band of the Hunts, Cyclist Battalion paraded the town, and the gaily decorated streets were thronged with happy people.

There were scenes of intense enthusiasm at Darlington, but happily unmarked by any touch of rowdyism.

Posted by Alice Barrigan at 11:00 No comments:

At Nunthorpe, impressive displays by the Nunthorpe and Marton Knitters remember the fallen of the Wars and the suffering of children and animals.  This photograph from the Nunthorpe Working Together Facebook page shows the display near the War Memorial.

Midshipman Duncan Stubbs is commemorated on that Memorial.  His story can be found here.  And here is a photograph of his father's horse Jess, one of the many horses who died during the First World War, can be found here 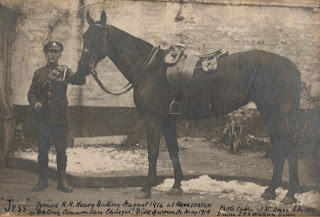 Duncan's father Thomas Duncan Henlock Stubbs built the Red House on Church Lane, Nunthorpe and the family lived there for many years.

Posted by Alice Barrigan at 00:30 No comments:

Email ThisBlogThis!Share to TwitterShare to FacebookShare to Pinterest
Labels: Nunthorpe

To Trustees for the equal benefit of Creditors, pursuant to 6th Geo. IV. cap. 16, sec. 4


Insolvents applying to be discharged

The Joseph Skelton who went bankrupt in 1830 must have been the husband of Elizabeth ("Betty") Catchasides, whose father and brother applied for their discharge in 1831.  Clearly times were hard in Hutton Rudby in those years.

Joseph and Betty had married on 3 August 1826, when she was about 42 years old.  She was the daughter of the elderly couple, James & Grace Catchasides, who kept the Bay Horse Inn at the top of Hutton Bank, beside her father's smithy.

Betty, her father, mother and brother all died in the first week of the cholera outbreak in Hutton Rudby.

For the full story of the year of the cholera and what happened to the unfortunate Catchasides, go to this post from 2012, where you will find the relevant chapter of my book Remarkable, but still True: the story of the Revd R J Barlow and Hutton Rudby in the time of the cholera.