To follow on from my last post on James Wilson, this is the newspaper report of George Wilson's missing book-keeper:-


EMBEZZLEMENT AT NEWCASTLE - John Carr, for nearly twenty-seven years in the employment of Mr George Wilson, linen and sail cloth manufacturer, of Newcastle and Hutton Rudby, in Yorkshire, as book-keeper and manager of his warehouse, in Pilgrim Street, has absconded to America, having embezzled and taken upwards of £600 belonging to his employer, in money he had received from various customers, and not in any way accounted for.  A warrant was taken out for his apprehension, and a search made for him in Liverpool, by the police authorities, as it was known he had proceeded to that port, but, so far, without being fortunate enough to discover the delinquent

An old resident of Hutton Rudby has turned up in Massachusetts, and I think he may like to come home.  You can see him in this fine mid-19th century portrait by Clement Burlison.

James Wilson was born in about 1775 at Woodhouse, a few miles from Alnwick, in Northumberland.  He married Mary Straker in Gateshead on 30 January 1798.  They had a large family – I have found the names of three daughters (Jane, Matilda and Mary) and six sons (William, James, John, Henry, George and Edward) and there were possibly more – and they lived in Newcastle.


We don't know when his wife died, but by 1840 James was living in Hutton Rudby.

The fortunes of his son George (1810-76) had brought him to the village.  George was to be the founder of the Hutton Rudby Sailcloth Mill on the banks of the River Leven.

George had come to Hutton Rudby as a very young man in the 1830s when he was working as a clerk for the linen manufacturers & spinners, Messrs Clarke, Plummer & Co.

It seems to me now, after looking at the newspaper reports that are now available online, that he had gone into the business in which his father had worked for many years.

This report shows that a Mr James Wilson had worked for Clarke, Plummer & Co for 37 years at their Northumberland Flax Mill at Ouseburn:-


A dinner was given on Monday last, by the workmen of the Northumberland flax mill, to Mr James Wilson, on the occasion of his retiring from his situation, when a silver cup was presented to him, bearing the following inscription:- "Presented to Mr James Wilson, by the workmen of Messrs. Clarke, Plummer, and Co., of the Northumberland flax mill, Ouseburn, as a token of their high respect for him, he having been agent for thirty-seven years to the said works. - 20th May, 1839."

I think it's very significant that James's daughter Mary, who generally recorded her place of birth in censuses as Newcastle, in the 1881 census was more specific – she said that it was Ouseburn.

There had been a flax mill by the Ouseburn near Newcastle since the mid-18th century (cf. here) and Clarke, Plummer & Co were evidently operating from there from the earliest years of the 19th century.  I assume they began with a water-driven flax spinning mill (cf here) but a steam engine was soon added.  Their first serious fire happened in 1822, when a flake of soot flew from the engine chimney and ignited a stock of flax and tow, and they had a very damaging fire in March 1836, when initial losses were estimated at £4,000.  For the men, women and children working there, the loss was of course of livelihood and means of subsistence. (For more on the lower Ouseburn industrial area, see here).  The fire of 1836 occurred while James Wilson was agent; I rather hope that it was during this calamity that he earned the respect of the workmen who gave him his silver cup on retirement.

Two years before James Wilson's retirement, this advertisement had appeared in the newspapers:

ROBINSON & WILSON,
(SUCCESSORS TO MESSRS CLARKE, PLUMMER & CO. AS)
LINEN MANUFACTURERS,
AT HUTTON RUDBY, YORKSHIRE, AND NEWCASTLE-UPON-TYNE;
BEG respectfully to acquaint their Friends that they have REMOVED their Stock from the Warehouse at the Northumberland Flax Mill, Ouse Burn, to a newly erected and commodious one at

No. 79, PILGRIM-STREET,
Where they intend to keep an extensive Assortment of every kind of LINEN GOODS OF CLEVELAND MANUFACTURE, for the accommodation of their Customers in this District, and where all Orders will be received and attended to from this Date.
Newcastle, Oct. 11th, 1837

This was George Wilson's venture, and from this advertisement it seems that he was originally in partnership with a Mr Robinson.  It looks rather as though George has taken over the Hutton Rudby end of Messrs Clarke, Plummer & Co's business.  I know that he continued to keep a warehouse in Pilgrim Street,  Newcastle, as it is mentioned in the Shields Daily Gazette of 11 May 1864, when it was reported that his bookkeeper and manager had absconded after 26 years with the firm, taking with him at least £600 from the till.

By 1840, George's father James had joined him in Hutton Rudby, and was listed there under the
description 'Gentleman' in the 1840 White's Directory.

I suspect that George must have been glad of James's presence in the village to supervise matters when George had to travel to Newcastle on business.  By that time, George was a family man.  He had married Ann Hutton in Newcastle on 9 June 1836, and their son James Alder Wilson was born in 1837, followed by Allan Bowes Wilson in 1839.

The censuses for 1841, 1851 and 1861 show that James lived in the last house at the west end of South Side.  (The house nowadays has a West End address, but the name West End was not used in the 19th century.)

This is a photograph of the house from the 1930s (courtesy of Malcolm McPhie), looking eastward along South Side:
The house looks rather different today: it has been rendered, the window glazing has been altered and, most noticeable of all, an enclosed porch has been added to the front door.

James & Mary's daughter Matilda (1808-96) married a master mariner, Thomas Churnside.  She was a widow by the time of the 1861 census.  They had at least four children:  Matilda (b c1836), Mary, (b c1838), Edward (b c1841) and Jane Ingo Churnside (b c1842).
Young Matilda was to be found in Hutton Rudby in 1851, acting as housekeeper to her grandfather.  In 1861, Matilda and her children were living at 45 Fowler Terrace, Bishopwearmouth.  By 1891, old Matilda was living with her son (a Master Mariner – the census notes that he was deaf) and her widowed daughter Mary Robinson, at Bar Moor, Ryton, Gateshead.

James & Mary's daughter Mary (b c1817) married a Mr Todd (probably John Todd).  Their children were (or included) James Wilson Todd (b c1842), Edith (b c1855) and Mary (b c1852).
At the time of the 1861 census, Mary was staying with her father in Hutton Rudby, together with little Edith, while James Wilson Todd, a ship broker's apprentice, was staying with the Churnsides.  In 1871, Mary (described as a schoolmistress) was living with her daughters at 38 Tatham Street, Bishopwearmouth, and in 1881 she and her son James (then unemployed) were living at 10 Harlow Street, Sunderland.

So it can be seen that the fortunes of Matilda and Mary were not as prosperous as those of their brother George.  Of the other brothers, William, James, John, Henry and Edward, I have no details.  Perhaps they too had George's entrepreneurial flair.

Allan Bowes Wilson (1839-1932) of Hutton House
for details of Allan's interest in the works of artist Ralph Hedley, see my blogpost here

John George Wilson (1849-c1930) was a prominent solicitor in Durham.  He married Anna Louisa Eade, daughter of the Rev Canon Eade, vicar of Aycliffe, in 1879.  He inherited Staindrop Hall in Co. Durham on the condition that the family surname was changed to Luxmoore.  Their son Allan Aylmer Luxmoore was also a solicitor in Durham.

Clement Burlison was a native of the city of Durham.  A few newspaper clippings serve to track his career, and you can see that it was his bequest that established Durham's first art gallery:-


Our talented townsman, Mr Clement Burlison, returned to England a few days ago.  He has been spending the last two years for improvement in his profession in Rome, Florence, Venice, &c, and we understand brings with him a magnificent collection of studies from the Old Masters, &c, which will add materially to the fame which, before he left England, he had acquired as a first rate historical and portrait painter.  He sent home during his travels several excellent pictures, which were included in the last exhibition of the Royal Academy.


DEATH OF MR BURLISON, OF DURHAM. - We regret to announce the death of Mr Clement Burlison (83), which occurred at his residence, Victoria-terrace, Western Hill, Durham, on Saturday.

Mr Burlison, who was one of the oldest citizens of Durham, was an artist by profession, and his abilities gained for him considerable local reputation.  On many occasions he received commissions to paint the portraits of notable citizens, and many of those now occupy prominent positions on the walls of the Durham Hall, where they are much admired for the lifelike fidelity with which Mr Burlison has invested them.  In other directions beside that of portraiture Mr Burlison's talents were greatly appreciated.  He leaves a widow and one daughter.


ART GALLERY FOR DURHAM
The Lord Lieutenant of Durham (the Earl of Durham) yesterday formally opened the art gallery which has been established in Durham by means of the bequest of the late Mr Clement Burlison, a Durham artist, who left to the city his collection of fifty pictures conditionally upon the city authorities providing a public gallery for their reception within a definite period.

The art gallery premises were in Sadler Street according to the Sunderland Daily Echo & Shipping Gazette of 31 May 1901.

Burlison left a record of his early life in a short book called The Early Life of Clement Burlison, Artist. Being His Own Record of the Years 1810 to 1847.  It was first published in 1898 and, according to the Newcastle Journal of 8 May 1914, "gives interesting information about the artist's methods of work".

James Wilson's fine portrait has been found by Brad Verter of Carpe Librum Books, Williamstown, Massachusetts.  Brad deals in books and art and tells me that Clement Burlison had his creative peak in the 1840s and 1850s, which is when he thinks this portrait was completed.

And how could Brad tell that this grand old chap was James Wilson of Hutton Rudby?  Because he is 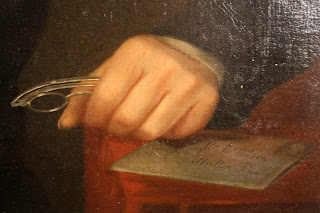 helpfully holding a letter addressed to himself.

This seems to me to be rather odd for a portrait intended for family, so I wonder if it was perhaps painted for some association or institution to which James belonged.  I wonder how it made the journey to the USA ...

If you are interested in acquiring James for your own walls (especially if it is a wall that James once knew, in Hutton Rudby or Crathorne!) please contact Brad at brad@carpelibrumbooks.com

And how can you resist, when old James is so finely rendered as this? 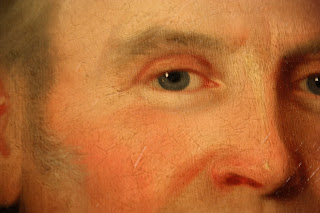 Posted by Alice Barrigan at 17:27 No comments: