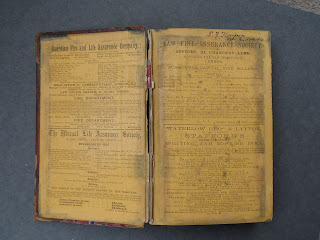 This diary belonged to Simon Frederick Thompson (1862-1928), solicitor, Middlesbrough.  His name does not appear in the list of solicitors for the town in the 'Country Solicitors' section, so possibly he was not yet on the Roll, or had only recently been admitted.

He seems to have started work in March and his first entry in the diary is for Sunday 21 March 1886:


Mother died at ten minutes to two in the afternoon

(His mother Ann was born in Langley, Northumberland, and was the wife of John Thompson, iron works engineer).

He soon begins to enter a brief note of  matters he has been dealing with each day, eg.:

Simon Frederick Thompson was in practice at 11 Albert Road, Middlesbrough; by the middle of the 20th century, the office was the home of the firm Thompson, Trotter & Gray.  In 1911, he and his wife Mary Grace Goodyear Beech were living at Cleveland Villas, Grove Hill, Middlesbrough; they had been married 19 years and had no children.  He died in 1928.

It is clear from similar diaries that the working day was shorter than has become usual in recent decades, but on the other hand, the office remained open on Saturdays and it is always interesting to remember their very different attitude to the Christmas holidays – they closed only for the afternoon of Christmas Eve and for Christmas Day itself. 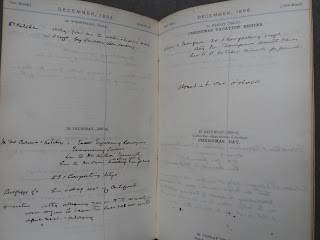 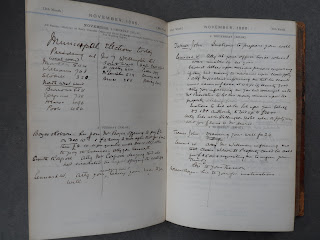 The report in the local newspaper shows how things have changed in local elections since 1886:

The contests for seats in the Middlesbrough Town Council as representatives for the West, South, North-West, and South-East Wards took place yesterday, but they passed off very quietly, any evidence of excitement being entirely absent.

The various candidates and their supporters worked energetically, as will be seen by the heavy polls, the result of the contests being that three of the retiring members have found themselves ousted.  The whole of the candidates supported by the Nonconformist Association have been elected, a heavy blow having been dealt the licensed victuallers’ interest.

The counting took place at the Town Hall [the Old Town Hall, on East Street], and, considering the cross voting and heavy poll, the work was got through with the most commendable promptitude, the results being declared from the window at 10.15.  There was a crowd of some 300 or 400 people in the Market-place at the time, and the names of the gentlemen who were successful were received with cheers.

Appended are the results, the asterisk preceding the names denoting the retiring members:-

We believe that an objection has been, or will be, lodged by Mr George Hearse against the return of Mr W Burrows for the North-West Ward, on the ground that Mr Burrows has contracted with the Corporation to supply the Fever Hospital with grocery, &c.  Mr Hearse has had a long interview with the Town Clerk (Mr G Bainbridge) this morning on the subject, but we have been informed that the details of that interview must be considered as private.


Two days later, the Daily Gazette reported that Mr Burrows had indeed “declined to accept office” because of his contract with the corporation.  His friends resolved to get him released from the contract and have it transferred to Messrs Birk Bros of Linthorpe Road, so that he could stand again.

Email ThisBlogThis!Share to TwitterShare to FacebookShare to Pinterest
Labels: Middlesbrough