My correspondent Ian remembered seeing it as he cycled past in the 1970s and once running over the field to explore it – but it had no doors or windows, so it was impossible to tell what it was.

I remembered the structure – in fact, I remembered having a conversation with someone who explained it to me – but I couldn't remember the answer!

Luckily, Malcolm McPhie knew who to ask.  And here I think it's appropriate to remind everyone that his facebook page detailing the history of the Hutton Rudby Choral & Dramatic Society is definitely not to be missed!  It's filled with fascinating information and many videos of performances and of several Village Events and even includes such gems as this – a photograph of the mallet with which Mrs W L Johnson of Crathorne Grange laid a foundation stone of the Hutton Rudby Village Hall on 15 October 1927. 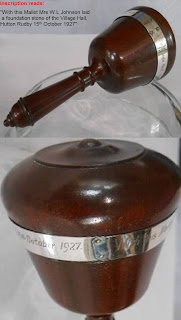 And so, thanks to Malcolm and with very many thanks to Maurice Atkinson, now 90 years of age, I have the explanation of the mystery stone structure.

It stood about half way between Hutton Rudby and Crathorne.  It was about 10 feet high and about 30 feet in diameter, but the outside walls were earthed up for about 3 feet so it may only have looked as thought it was 6 or 7 feet high.

It had been built for water storage, was fed from a windmill-driven pump and was located on raised ground to increase its pressure.

Its function was to supply water to Crathorne Hall and the village of Crathorne.

Maurice was related to the Atkinson family that had the mill at Crathorne and he remembers that they had piped water also fed from that tank.  He thinks its use was discontinued shortly after the Second World War when mains water arrived in the area.  It was demolished several years ago.

Maurice also reminded my friend that in the same field was a dummy WWII airfield, complete with its own entrance and a sign above it – it was called "Seldom Scene" airfield.