The family of the Revd Thomas Todd, Rector of Kildale

In February 2013 I mentioned the family of the Revd Thomas Todd, Rector of Kildale, and his wife Elizabeth Jackson.  She was born in Wilton, the eldest daughter of George Jackson of Lackenby and his wife Margaret Rowland.

Widowed at the age of 52, Elizabeth left Cleveland to join her married daughter Margaret on the Isle of Man.  She was accompanied by her two unmarried daughters, Isabella and Rhoda, and the infant motherless children of her eldest son, Edward.

Isabella and her nephew Richard Ord Todd both emigrated to Australia, and it's from there that I have been very glad to receive a selection of Todd family photographs taken in Yorkshire, the Isle of Man and Australia.  They came to my correspondent via her mother from the last survivor of the Todds there.

Here is Mrs Elizabeth Todd, in her new life on the Isle of Man:


And here is her daughter Isabella.  She went out to Australia as a governess in 1880, a few years after this photo was taken:

Here is her younger sister Rhoda.  She was the principal of the Cleveland Private School at Douglas, IoM, and this photograph shows her looking appropriately scholarly:

I think that these two girls, photographed at the studio of G. Wallis, Union Place, Whitby, look very like Isabella and Rhoda, but I leave it to readers to judge for themselves: 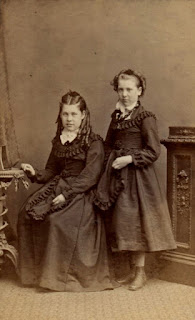 My Australian contact points out that they can't be - the photo must date from after 1860 and they would be older than that.  But they certainly look like Todds!

Their eldest brother Edward Todd was a chemist & druggist.  On 17 October 1861 he married Elizabeth Mary Poynter (1841-66) in Guisborough.  She died on 2 July 1866 leaving Edward with a two-year-old daughter and a three-month-old boy, Annie and Richard.

Here are Edward and Elizabeth in happier days:

Edward must have found himself unable to manage with his little children and so entrusted them to the care of his widowed mother and spinster sisters.

I think the photograph below must have been taken after Elizabeth's death.  Certainly Edward looks more careworn here, and he is accompanied not by his young wife, but by his dog.  Perhaps his mother wanted a photograph of him to take with her when she left for the Isle of Man with his little children:

His first son, Richard Ord Todd, became a bank clerk.  Here he is, photographed as a young man on the Isle of Man: