Far off in Sydney, Australia, Richard Ord Todd and his aunt Isabella had photographs of her nephew William King Weatherill of Guisborough and his children.

(William was the brother of Annie Weatherill, whose diary I posted on 1 December 2012.)

William King Weatherill was born on 22 November 1844. These photos, taken in Harrogate, show him apparently in the prime of life and with everything before him.


He was married to Hannah Maria Pickersgill and they had two children. 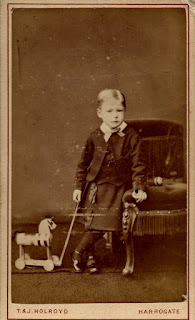 ]
Here is his son Thomas, and below, his daughter Mary. 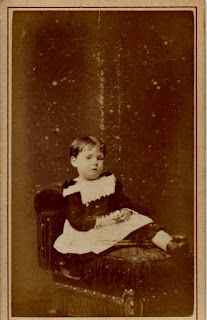 But William had known a good deal of sadness.

In March 1875, his brother Herbert Thomas Weatherill died in Bournemouth of “a long and painful illness”, presumably tuberculosis.

Only two years earlier, he had been captain of the Guisborough Cricket Team.  He had reached the rank of Captain in the Rifle Volunteer Corps.  But he died at the Friends' Retreat near the City of York, and the record of his last weeks is a very sad one.  (The archives of the Retreat are held at the Borthwick Institute, York, where they are currently being digitised)

William had been admitted, we would say now, because he was suffering a psychotic episode.  But I will leave the contemporary account to speak for itself ...

The case-notes of the Retreat record that he was “a tall very Stout Man”, about 6 feet 2 inches tall and 17 stones in weight.  His eyes were hazel.  He had suffered his first attack of illness when he was 31 and he was admitted to the Retreat on 29 November 1876.  He was a private patient; his wife Hannah was paying for his care.

He was certified insane by two medical men of 15 York Place, Harrogate: Dr George Oliver and William Short, a surgeon and apothecary.  Dr Oliver stated that William talked incoherently and had heard “Voices of Jews”.  He believed that he had an eye in the middle of his forehead which he could use to see through the back of his head.  He wrote that “Mr Thomas Oxley informs me that he is apt to suddenly get out of bed at night, go to the door and put his shoulder against it & thrust against it.”  William Short reported that William said there was “a price on his head because his Eldest son spoke of Mrs Weatherill as his Brother”.  Short also wrote that William claimed to have “met the Prince of Wales as a Beggar”.

At the Retreat his head was examined in accordance with the current pseudo-science of phrenology, but was found to be normal.  The pupils of his eyes were normal, but his expression was described as vacant.  He was in feeble bodily health and was already suffering from tuberculosis.  He was constipated and his urine, “which he passes only about twice in the twenty four hours, is very highly coloured, has an extremely offensive odour & becomes covered with a greasy looking film when left standing”.  He also had a “semi-psoratic dull redness which exudes a quantity of serum & when dry becomes covered with scales” which he stated to be “the Cape Leg”.

His conversation was “rambling and incoherent”, and he wandered aimlessly around, standing “staring at objects for an hour together”.  He saw needles flying about and had lost all memory of places and people.  He was not suicidal, but could be very dangerous during his epileptic outbreaks.  However, he did not have any symptoms of general paresis (also known as “general paralysis of the insane”, which is caused by tertiary syphilis and was a common diagnosis for the mentally ill at this time).

This was his first bout of mental illness and it had lasted about six weeks.  The doctors thought the cause was William’s excessive drinking.  He had apparently always been of intemperate habits and usually drank large quantities of brandy – “from 1 to 2 bottles per day”.  There was no hereditary disposition to insanity in the family and he had had “no peculiarity in childhood”.

The case-notes then detail the staff’s impressions of William.

On 29 November 1876, he is described as being “very dull and stupid & with difficulty can be made to answer questions.  Stares in a dull vacant manner & seems half asleep.  Takes little notice of those about him”.  He continues much the same until 6 December, when he “seems very perverse & inclined for a row”.  The next day he had “several attacks of epilepsy (petit mal) during the night between 1 and 3 am”.  Afterwards he slept all day until 8.20pm when he was given some food.  On 10 December he was “much brighter”, answering questions and conversing to some extent although towards the evening he “became dull & stupid” and at 10.15pm he had “a slight convulsive seizure”.

This pattern – excitement followed by a seizure and then quiet dullness – repeats through William’s case-notes.

By the end of January 1877, having been in the Retreat two months, he was “gradually growing weaker and weaker”.  He was taking his food very badly, and was allowed “a small bottle of Champagne daily”.  On 4 February he “seemed to be sinking but after some brandy egg & milk he recovered”.  He was in a “very anxious condition”.  The next day he had “an outbreak of violent excitement & required 4 attendants to keep him in bed”, but after that he slowly drifted downhill.

On 9 February he “took some brandy egg & milk at 2am this morning after which he seemed better & more inclined to settle down quietly.  However at 7am he became very restless, “throwing his arms about & apparently going in for another epileptic seizure”.  His breathing became more difficult and, before assistance could be given, he quietly passed away at 7.30am.  His attendant, John Thomas Dowsing, was present.  The cause of death was given in the notes as Syncope, with the diagnosis at the end of the notes: Epileptic Dementia.

The newspaper notice of William's death shows that the family kept the true state of William’s deteriorating health secret.  In Guisborough, people were told that he had gone abroad for the sake of his health – nobody was to know that he had died in the Retreat:

Volunteer Officer's Funeral.  The remains of Captain W K Weatherill, of Guisborough, late of the 20th North York Volunteers, was interred on Tuesday, the 13th instant, in the Cemetery, at Guisborough.  The funeral cortege was a long one, and was preceded by the band and members of the above Rifle Volunteer Corps, the 8th Battery of the 1st North York Artillery Volunteers bringing up the rear, and most of the leading residents in the town.  The Rector, Rev F H Morgan, conducted the funeral service at the Cemetery.  The deceased had recently been abroad for the benefit of his health, and had returned home somewhat improved.  Latterly, however, he fell worse, and died on Friday.